Freedom House reports that democracy has been in decline for 16 consecutive years. They estimate that only about 20 percent of the world’s population lives in free countries today. Populist leaders and their movement have gained electoral victories in what were considered stable, consolidated democracies. Authoritarian regimes have become more skilled at repressing challengers both at home and abroad. At the same time, social resistance to authoritarianism and populism is on the rise. Fighters for democracy and their movements display great courage in resisting some of the most powerful and resilient of authoritarian regimes, risking imprisonment and death. The recent re-invasion of Ukraine has strengthened democratic alliances. In this month’s episode of Global Insights, panelists will discuss the current state of democracy and authoritarianism, as well as the implications of contemporary social movements for both.

Brandon Dickson is a current MAGG and incoming PhD student at the Balsillie School of International Affairs University of Waterloo. His research interests are focused on the intersection of education and politics in international settings and have been funded by both SSHRC and NSERC.

Abbas Imam is a student at Balsillie School of International Affairs and is affiliated with the Conflict and Security Research Cluster as a Support Officer. His broader research interests include food security and health in fragile and conflict affected states.

Anastassiya Perevezentseva is a doctoral candidate at the School of International Service, American University, and a Princeton Dissertation Scholar. Her research focuses on contentious politics, populism, and democratic backsliding in Central and Eastern Europe. In 2021, Anastassiya co-published an article with James Bryan on elite response to protest in Russia in Democratization. Prior to her doctorate, she has served as a youth representative of a UN DPI associated NGO. 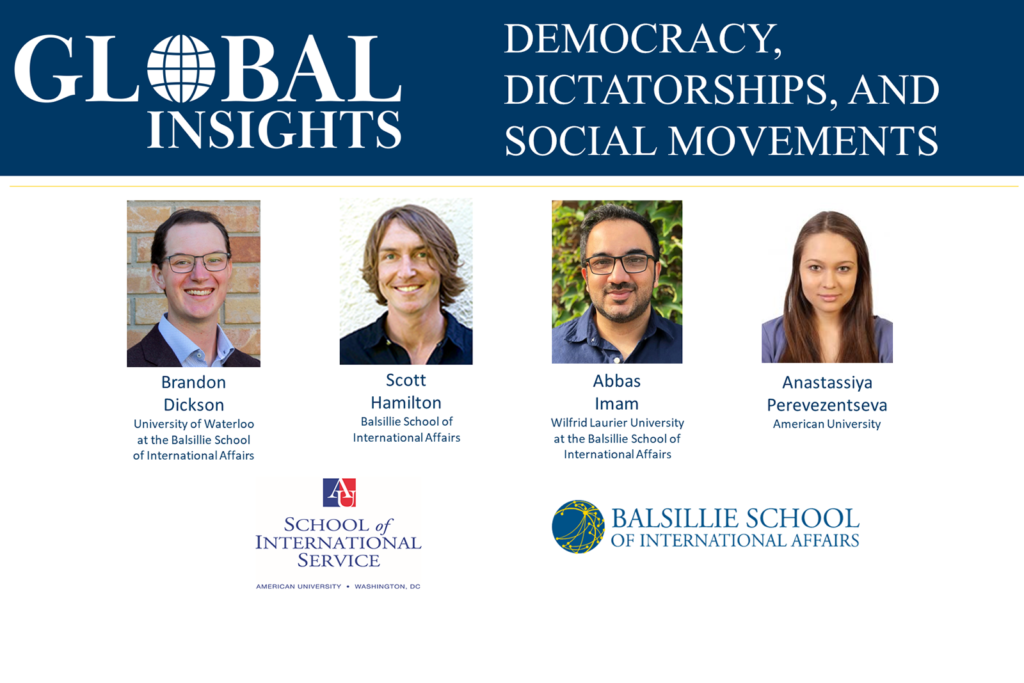