After four years marked by the contentious rhetoric and policies of the Trump administration, most Latin Americans welcomed the victory of Joseph Biden. Indeed, the new US president has promised a more cooperative and multilateral approach to many of the problems the hemisphere faces: a response to the ongoing pandemic and its economic and social aftermath, longstanding migration crises, climate and environmental emergencies, and high levels of insecurity in a number countries, fed by transnational illicit markets [perhaps add other themes depending on the participants]. In an era of eroding US credibility and Brazilian and Mexican ambivalence about global affairs, who in the hemisphere retains the credibility to spur collective actions in response to these problems?

Julia Buxton is British Academy Global Professor at the University of Manchester, a Region Head (Latin America) at Oxford Analytica and Senior Fellow at the Global Drug Policy Observatory, University of Swansea. She specialises on drug policy, illicit economies, and conflict and development with geographic expertise on Venezuela.

Juliano da Silva Cortinhas is Professor of International Relations at the University of Brasilia. He researches issues related to International Security and Brazilian Foreign and Defense Policies. He has published articles and chapters in Portuguese, Spanish and English.

Tom Long is Associate Professor at the University of Warwick. He is a member of Warwick’s Global History and Culture Centre. Tom is also an Affiliated Professor at the Centro de Investigación y Docencia Económicas (CIDE) in Mexico City. His research primarily focuses on U.S.-Latin American relations and the dynamics of asymmetry in IR, as well as topics related to emerging powers, Latin American politics, North America, and small states. Tom’s first book, Latin America Confronts the United States: Asymmetry and Influence (2015), was named one of the best books of 2016 by Foreign Affairs.

Luis Schenoni is a Postdoctoral Researcher at the University of Konstanz and Affiliated Professor at the Centro de Investigación y Docencia Económicas in Mexico. He obtained his PhD in Political Science at the University of Notre Dame in 2020 with a dissertation exploring the impact of war on state formation in Latin American history.

Matthew Taylor is an associate professor at the School of International Service at American University. He has lived in Latin America on and off for more than two decades, and is the author or co-editor of four books and a variety of articles on crime, corruption, courts, and development in the region. His most recent book is Decadent Developmentalism: The Political Economy of Democratic Brazil (Cambridge University Press, 2020). 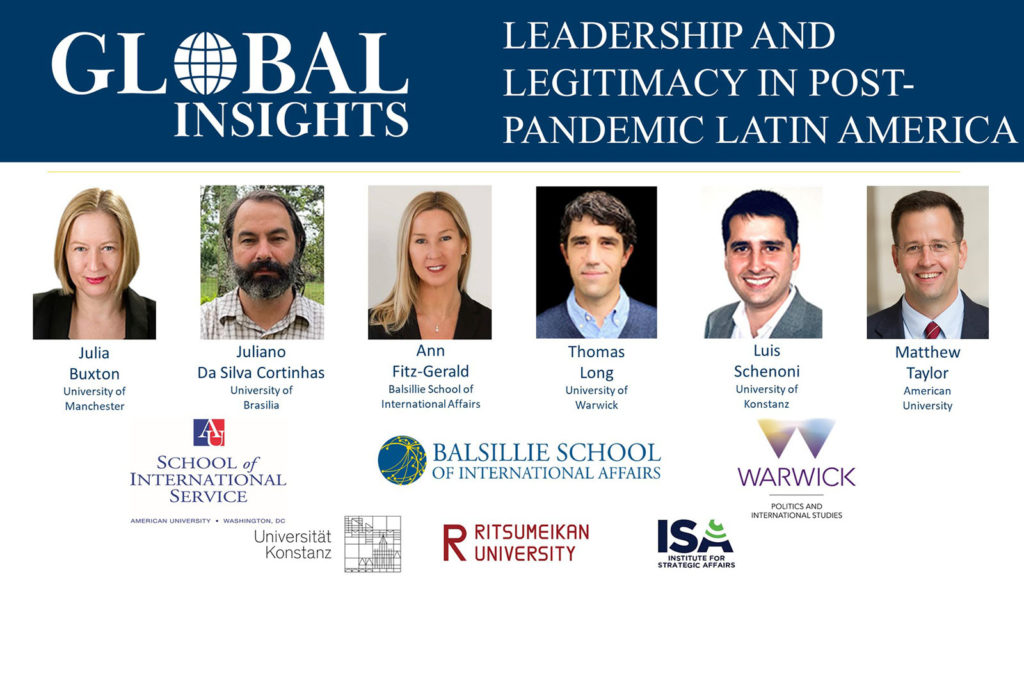