Global Insights: Steps towards Lasting Peace in the Middle East?

2020 may come to be remembered as a momentous year for the Middle East. The civil conflicts in Syria and Yemen continued for yet another year without any end in sight, while the rivalry between Saudi Arabia and Iran intensified. However, perhaps the most notable development was the Abraham Accords, the agreement brokered by the United States that not only normalizes relations between Israel and the United Arab Emirates, but set the stage for similar agreements between Israel and other nations in the region, including Bahrain, Morocco and Sudan. The Trump administration’s ‘Peace for Prosperity’ plan, however, was roundly rejected by the Palestinian Authority which broke ties with the US and Israel as a result. With President Biden seeking to restore aid and reopen diplomatic relations with the Palestinians, as well as facing pressure from progressives in his party to take a more critical approach to Israel, what are the prospects for a more comprehensive peace? Panelists on this week’s episode of Global Insights will discuss the opportunities for an end to conflict in the Middle East, the barriers that still exist, and what steps the international community might take to secure lasting peace in the region.

Nathan C. Funk is Associate Professor and Chair of Peace and Conflict Studies at Conrad Grebel University College, the University of Waterloo, in Waterloo, Ontario. His research and writing address religious and cultural dimensions of conflict and peacemaking, and focus especially on the Middle Eastern context, “Islamic-Western” identity conflict, local empowerment in international peacebuilding, and sustained dialogue.

Jasmin Habib is Associate Professor in the Political Science department and Associate Director of the PhD in Global Governance at the University of Waterloo. Trained as a cultural anthropologist, Dr. Habib focuses special attention on transnational relations to Israel and Palestine. Current ethnographic interests include historicizing the Israeli Communist Party from the perspective of some of its Jewish-Israeli and Palestinian members; and engaging with Israeli emigres in the US and Canada on their ‘critical distance’ from the Israel/Palestine conflict. She is the author of Israel, Diaspora and the National Routes of Belonging and co-editor and contributor to America Observed.

Following an initial career with the Israeli defence forces, Uzi Mahnaimi served as a war correspondent across the Middle East region for more than 30 years – 20 of these years were with the Sunday Times as its Middle East correspondent. A graduate of the Hebrew University in Jerusalem, he has lectured at many institutions on issues related to Middle East security, including at Columbia and the New York City School of Journalism. His current focus is on connecting Israeli technology companies with new partners across the Middle East and worldwide.

Nicola Pratt is Associate Professor (Reader) in the Politics and International Studies Department at the University of Warwick, UK, and Vice President of the British Society for Middle Eastern Studies (BRISMES). She teaches and researches on the international politics of the Middle East, with a particular interest in feminist and decolonial approaches and a focus on ‘politics from below.’ She has written and co-edited a number of books on women and gender in the Middle East and on modern Egyptian politics. Her latest book is entitled Embodying Geopolitics: Generations of Women’s Activism in Egypt, Jordan, and Lebanon.

Guy Ziv is an assistant professor at American University’s School of International Service (SIS), where he teaches courses on U.S. foreign policy, international negotiations, U.S.-Israel relations, and Israeli-Palestinian peacemaking. His book, Why Hawks Become Doves: Shimon Peres and Foreign Policy Change in Israel, was published by SUNY Press in 2014, with an updated paperback version published in 2015. 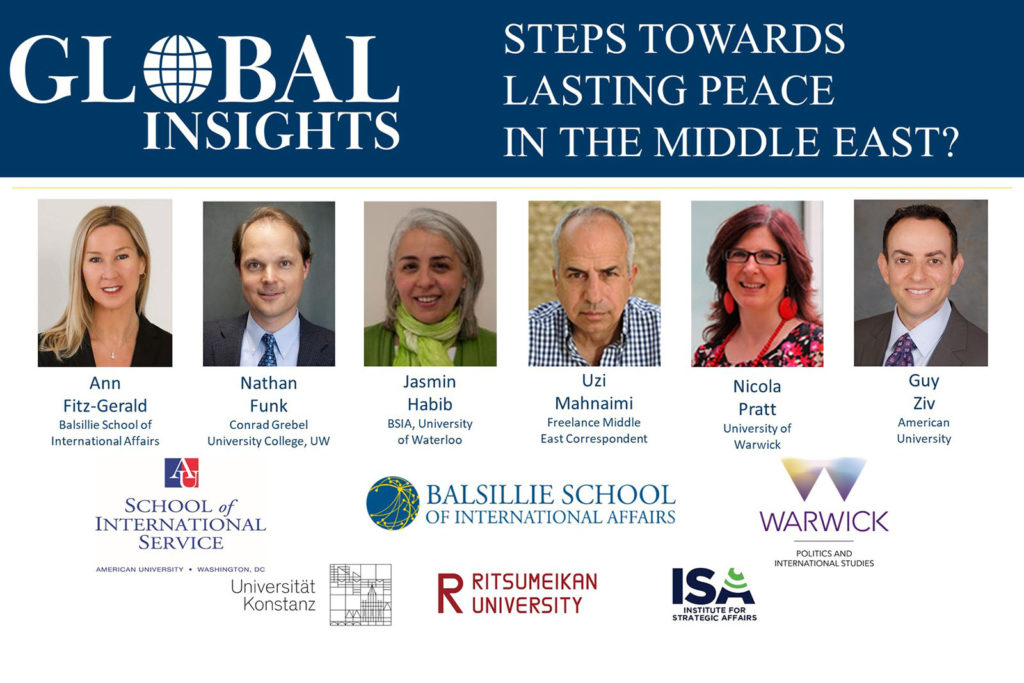