The Russian Invasion of Ukraine: A Catastrophe and its Implications

Ukrainians are fighting for their independence and the future of their country against a brutal assault by the Russian state. This panel will reflect on the implications of Russia’s invasion for Ukraine and the world. This event is co-hosted by the BSIA, IMRC and the Department of Global Studies at Laurier.

Ivan (John) Jaworsky is Professor Emeritus, Department of Political Science, University of Waterloo. His research interests include dissent and its legacies in the post-Soviet region, regional issues and inter-ethnic relations in Ukraine (with a focus on Crimea and the Crimean Tatars), and civil-military relations in Ukraine.

Oksana Dudko is the Petro Jacyk Postdoctoral Fellow in Ukrainian Studies at the University of Saskatchewan. Oksana is a historian and curator whose research explores the history of 20th-century Europe with a special focus on violence, gender, and the cultural history of Ukraine, Eastern Europe and the Soviet Union.

Jörg Broschek is Canada Research Chair (Tier 2) in Comparative Federalism and Multilevel Governance and Associate Professor of Political Science at Wilfrid Laurier University. His research explores how federations like Canada or Germany and more encompassing systems of multilevel governance like the European Union adjust to new international and domestic challenges.

Derek Hall is Associate Professor in the Department of Political Science and the Balsillie School at Wilfrid Laurier. He researches global political economy, political ecology, and critical agrarian studies with particular attention to Japan and Southeast Asia.

Tom Deligiannis is an instructor in the Department of Global Studies at Laurier specializing in peace and conflict studies.  Tom’s research focuses on the conflict impacts of human induced environmental and change.

Tara Bedard is Executive Director of the Waterloo Region Immigration Partnership and was previously a senior leader with a European public interest law organization working on human rights and social policy implementation with intergovernmental institutions and national governments. She has over 20 years of experience working in migration, forced displacement and refugee matters.

Moderated by Tanya Richardson, associate professor in the Department of Global Studies and the Anthropology Program at Wilfrid Laurier University. During the past two decades, she has carried out ethnographic research in Ukraine about topics such as such as placemaking practices in Odesa, nature conservation, and apiculture.

Image: “May that Nuclear War Be Cursed” (1978). By Maria Primachenko (1909-1997) a folk artist from the village of Bolotnya located 30 km from the Chornobyl Power Plant. On February 27, Russian forces destroyed a museum which held 25 of her paintings. 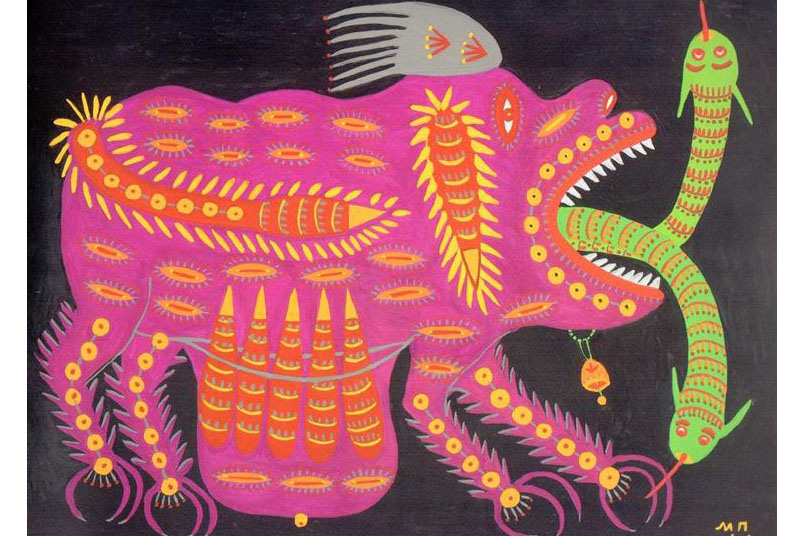