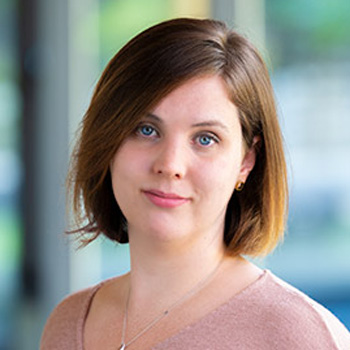 Audra Mitchell (she/her) is a settler of Ukrainian, Polish, Scottish and English ancestry, currently living and working on the Ancestral and Treaty lands of the Attawandaron (Neutral), Haudenosaunee (Six Nations of the Grand River) and Anishinaabe (Mississaugas of the New Credit) peoples.

Prof. Mitchell holds the Canada Research Chair in Global Political Ecology at the Balsillie School of International Affairs. From 2015-18, she held the CIGI Chair in Global Governance and Ethics at the Balsillie School of International Affairs. Audra has previously worked at the University of York, UK (2010-15) and the University of St. Andrews, UK (2009-10), and in 2014 she was a visiting scholar at the Universities of Queensland (Australia) and Edinburgh (UK). Audra completed her PhD at the Queen’s University of Belfast, UK (2009).

Prof. Mitchell has published four books and special journal editions, over thirty journal articles and book chapters, and has led a grant portfolio of over $2 million, including several international partnerships and networks.

Prof. Mitchell’s vibrant, multi-disciplinary program of research addresses global ecological harms through the lens of multi-scale structural violence, grounded in active engagement with currently-marginalized, multi-species communities. For example, her work examines the relationships between complex harms such as plant and animal extinctions, climate change and pollution and structures of violence such as colonization, racism, gendered violence and genocide. Audra’s unique approach weaves together her background in violence studies, global theory, political ecology and anti-oppression theory (including decolonial, Indigenous, BIPOC, queer, more-than-human, and critical disability studies). Her recent work is indebted to collaboration and co-creation with Indigenous and BIPOC scholars, knowledge keepers and communities in Canada, Australia, the United States and elsewhere. Audra has also been active in developing research communities committed to mentoring, amplifying and supporting emerging researchers from currently-marginalized communities.

Prof. Mitchell is a neurodivergent (Autistic and Dyspraxic) scholar. Her work actively engages neurodivergent methods and forms of knowledge, and she is committed to critiquing ableist forms of violence in and beyond academia, including by building solidarities across marginalized communities.

Audra currently has research opportunities available for students and community-based researchers interested in any of the research streams outlined above. Researchers with lived experience of marginalization are particularly encouraged to connect.