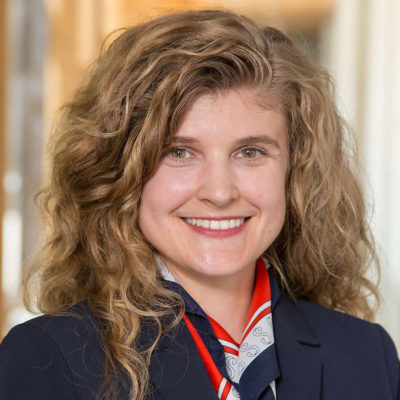 Kristen Csenkey is a PhD (ABD) at the Balsillie School of Intentional Affairs. She is also a Fellow with the Canadian Global Affairs Institute (CGAI) and the North American and Arctic Defence and Security Network (NAASDN). Kristen is an expert in cyber governance and focuses on understanding the global security entanglements of emerging technologies. Her research interests lie at the intersection of global governance, emerging technologies, cyber security policy, and innovation. Her work connects Canadian foreign and defence policy, North American defence, security cooperation among allies, and critical approaches to technology, science, and innovation management.

Kristen’s work often employs a multidisciplinary focus, as she draws on her many collaborations with other social and science disciplines to inform her work. Her publications appear in the Journal of Cybersecurity (forthcoming) and the Canadian Naval Review, among others. It is important for her to create clearly communicated content based on her academic research. As such, Kristen publishes many policy-focused pieces through CGAI, NAADSN, and other collaborative research networks in Canada.

Kristen’s research contributions are recognized through numerous awards, accolades, and scholarships. Kristen was the recipient of the 2020 Women in Defence and Security Canada (WiDS)–CGAI Fellowship Award and was acknowledged as an Emerging Thought Leader in Digital Security by Women in International Security Canada (WIIS-C) in 2020. She was also awarded the merit-based Ontario Graduate Scholarship (OGS).

Kristen is a proven leader with the ability to successfully direct diverse multidisciplinary teams and bring high-impact projects to fruition. Her teams work on cutting-edge research with a focus on producing accessible and informed outputs. She has an impressive track record of success in securing funding for high-value projects, notably as the Principal Investigator of a number of Targeted Engagement Grants from the Department of National Defence’s Mobilizing Insights in Defence and Security (MINDS) program. Currently, she leads projects focusing on the topics of quantum computing, cybersecurity, connected technologies in the Canadian Aviation Ecosystem, and cyber-resilient electric vehicles.

Kristen often participates in informative conversations by appearing in top-rated podcasts, including dC4eRadio: Sounds of Ethics through the University of Toronto, and Energy Security3 and Defence Deconstructed through CGAI. Her work is featured in iPolitics and her many opinion pieces can be found in The Hill Times. Kristen has participated on panels with many distinguished colleagues in academia, civil society, industry, government, and the armed forces, where she has spoken about technology, policy, and cybersecurity.

She frequently serves as an advisory committee member, including for the Waterloo Cybersecurity and Privacy Institute (CPI), Best Defence Conference, and the Graduate Enhancement Fund, Professional Development, and Graduate Research Committees at Wilfrid Laurier University. Kristen is often called to give expert advice to various government departments in Canada.

Kristen has professional experience in various levels of government and research positions at top academic institutions in Canada. Previously, she worked as part of the Political Affairs team at the Embassy to Hungary, Slovenia, and Bosnia and Herzegovina in Budapest. Kristen has provided strategic research on diverse projects for various faculty in social science departments throughout her academic career. She holds HBSc, MA, and MAP degrees and continues to focus on governance challenges in Canada.

Keep up-to-date on Kristen Csenkey’s latest research, complete list of publications, briefs, podcasts, and connection to other interactions on her Linktree: https://linktr.ee/KristenCsenkey