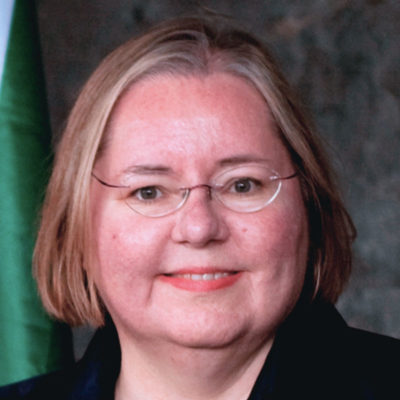 Lucie Edwards retired from the Department of Foreign Affairs in December 2009.  Her last assignment in a 33 year career with DFAIT was as Chief Strategist and Head of the Office for Transformation. To mark her retirement, she was awarded the Department’s Lifetime Achievement Award of Excellence for 2009.

She had previously served in Ottawa as Assistant Deputy Minister for Corporate Services (1996-99), Director General of the Global Issues Bureau (1995-96), Director of Middle East Relations (1992-93) and Chair of the Southern Africa Task Force (1989-93).

Overseas, she served as Canadian High Commissioner to India (2003-06), South Africa (1999-2003) and Kenya (1993-95). She was awarded the Public Service Award of Excellence, its highest award, for her humanitarian work as Ambassador to Rwanda in 1995. She has also served at the Canadian Embassy in Tel Aviv (1977-1980) and in South Africa (1986-89), where she led Canada’s human rights work in the black townships. She has worked extensively at the United Nations, notably as Permanent Representative to UNEP and HABITAT (1993-95), and at the Commission on Sustainable Development.

Throughout her career she has specialized in international development, with a particular interest in food security and rural poverty in Africa and South Asia. Mrs. Edwards has played an active leadership role in the Consultative Group for International Agricultural Research (CGIAR), notably serving as Chair of the World Agroforestry Centre from 1999 to 2003. She currently serves as Chair of the Board of Trustees for Partners in Health Canada.

Lucie teaches Global Politics, Canadian Foreign Policy and Environmental Policy in the Political Science Department at the University of Waterloo. She was appointed Ashley Fellow at Trent University in the 2011-2012 academic year and currently serves as a member of  Trent’s Board of Governors.

For further info, including a video on Lucie’s research activities, see Trent University Luminaries: Lucie Edwards, the CIGI podcast, and read an interview with The Ploughshared Monitor, Q&A: In pursuit of peace with Lucie Edwards.