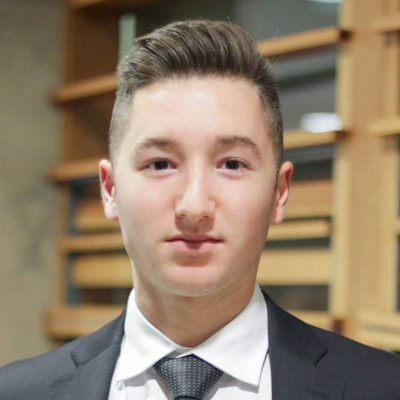 Marcello Maddalena graduated from Queen’s University in 2020 with a Batchelor of Arts degree in Political Studies. During his time at Queen’s, Marcello developed a strong interest in global affairs and participated in numerous extracurricular activities, including serving on the Executive Committee for Queen’s Model Court and Academic Director for the Political Studies Department Student Council.

During Marcello’s undergraduate studies, he participated on a semester exchange at Fudan University in Shanghai, China. Part of this experience was the opportunity to collaborate with a diverse group of students where he conducted a research project that included field research involving a cross-cultural comparison of students’ opinions on climate change.

This experience along with other coursework inspired Marcello’s undergraduate thesis where he explored and refined interests surrounding the US-China great power relationship. In the research paper, he explored developments in China’s grand strategy to understand its implications for the liberal international order. He focused specifically on domestic limitations that influence China’s policy interests, concluding the threat China poses to United States power is manageable as neither China nor the United States can afford to depart from mutual cooperation.

While at the Balsillie School, Marcello hopes to develop his understanding and focus his research around the influence of emerging technologies on international law and security studies.