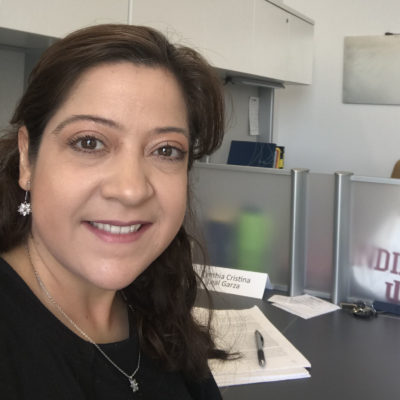 Cynthia Cristina Leal Garza is studying the PhD in Global Governance at the University of Waterloo and the Balsillie School of International Affairs. She is undertaking this study as a result of the High-Level Training Program for the Federal Public Administration Scholarship (2017-2021) that she was awarded by the Mexican National Council for Science and Technology (CONACYT) thanks to the Nomination of the Mexican Secretariat of Economy.

Previously in Mexico, she worked for five years as Deputy Director for Economic Promotion at the Mexican Secretariat of Economy, in its Federal Delegation to Nuevo Leon. There, she promoted the programs of the Secretariat and the benefits of both structural reforms and international commercial agreements, to economic agents.

She served as Technical Secretariat of Legislative Commissions at the Centre for Legislative Studies of the State Congress of Nuevo Leon; and she has also worked as part-time professor at the Department of International Relations and Political Science at the ITESM, Monterrey Campus.