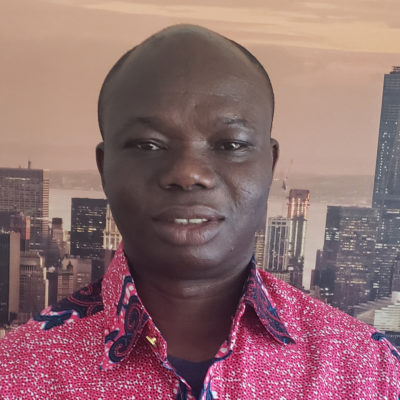 Douglas Baba was born by parents with no formal education, and was raised by his maternal grandparents who had no education either. Douglas grew up in a farming village of Ankapon Akuraase in a forested region of Ashanti in Ghana, where the main occupation was subsistent agriculture and cocoa farming. Douglas’ village was a small mud cottage roofed with raffia. But his ambition and resolve to succeed was not limited by his environment. Thanks to his grandmother who took such a bold and thoughtful decision to enrol him in an elementary school in the nearest neighboring community, which was about a four-kilometer daily trek from home. His grandmother’s decision was pivotal in shaping the rest of his life up to this stage.

Revealingly, Douglas is proudly the first in the generations of his entire family tree to have attained post-secondary education. After his secondary education, Douglas proceeded to a three-year post-secondary teacher education, where he obtained his teaching certificate and license in 2002. Douglas made a personal request to the regional education authorities to be stationed back to the political district where he grew up to teach there after completion of his program. The request was granted since many newly-trained teachers would decline to be stationed there due to the deprived nature of the area with concomitant poor social amenities. He has, since, gone on to give back and impacted many lives especially, through solving social problems of family members and close friends, teaching children and young people in his community and sharing his life story with them to motivate and empower them. He taught for three years in his assigned station after which he proceeded to the Kwame Nkrumah University of Science and Technology, where he obtained a four-year Bachelor of Arts degree in Geography and Rural Development in 2009.

After his university studies, Douglas went to teach Geography in a reputable Senior High School in Ghana-Yaa Asantewaa Girls from 2009-2012. During these three years, Douglas taught his students with distinction and positively, impacted many of his students through the sharing of his personal life stories with them. In September 2012, Douglas immigrated to the Province of Manitoba, Canada as an international student where he studied Master’s in Development Practice at the University of Winnipeg. Whilst at the university, Douglas won two separate awards during his studies: Master’s in Development Practice Award in 2012-2013 academic year and the University of Winnipeg Graduate Scholarship from the University of Winnipeg Foundation Program. Douglas, as part of his program, engaged in many research works with World Food Program in Ghana, Northern Prosperity Development Initiative in Manitoba, and also presented papers at many international conferences including Columbia University in the United States. Douglas has been working with the Manitoba Government since 2015 and also co-manages the African Institute of Philanthropy. But he is not yet done. Douglas is now pursuing a scholarly ambition in international public policy to obtain cutting-edge training so that he could contribute to the development of knowledge in international public policy to help communities, institutions and governments attain their aspirations. This has become possible with a generous CAD15, 000 scholarship award from Wilfrid Laurier University Graduate Scholarship. He is very grateful to the university and the faculty for that award, Douglas is now passionate about best practices in good governance that will help countries, especially; in third world countries improve their governance for the good of the people. He is also zealous about and follows passionately things happening in the global arena. Douglas dwells a lot on education, poverty, humanitarian assistance and community support as a current director of strategic partnerships for the African Institute of Philanthropy. Issues of environmental degradation, especially, destructive gold miming in Africa is also of a concern to Douglas and wish to contribute to its solution in future and the International Public Policy is a good call for him.

Drawing on his personal story, he is convinced that formal education remains a powerful tool for opening doors of opportunity. This includes empowering individuals to break generational cycles of poverty and want, ignorance, and self-doubt. It also includes providing the means to unlocking the potential for communities to discover themselves, work together to address common problems, and attain common aspirations. This is a conviction I have lived to believe. Where there is educated or literate populace, at least, there is a relative peace. This is what the world needs.