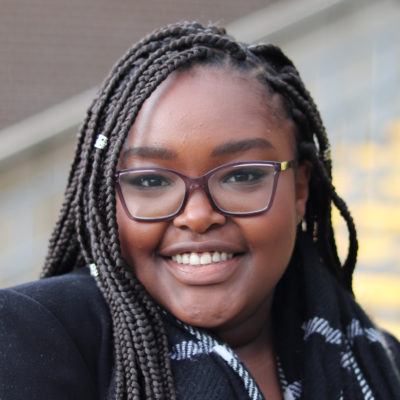 Ivy Muriuki holds a Bachelor of Arts from the University of Waterloo, with distinction. She completed a joint honours Legal Studies and Sociology degree, with a minor in International studies in 2020.

During her time at the University of Waterloo, Ivy gained knowledge in multi-lateral institutions, international relations, international public law, decolonization, democracy, human rights, and global development. The multi-disciplinary nature of her studies allowed Ivy to investigate the critical role institutions play in the administration of human rights. Ivy worked for the University of Waterloo’s Human Rights, Equity and Inclusion Office, where she led the research and planning process for an upcoming institutional equity initiative. Ivy also competed in three Mock Trial Competitions where she was awarded the MVP award for excellence and creativity on two separate occasions. She later served as an executive for Mock Court Cases, a competition focused on social justice cases. Ivy also volunteered for two start-up companies: Generation1 Networking Program and BeBlended,Inc. Both targetedtowards the needs of Black men and women that were otherwise unmet or inaccessible. After completing her undergraduate degree, Ivy spent the summer working as a Global Project Auditor for TD Canada Trust where she supported annual testing to identify and mitigate potential risk for internal projects.

Ivy wrote several research papers during her undergraduate degree that focused on the limitations that international institutions face in their endeavors to actualize nation-state development and standardize access to rights. For example, the impact of competing cultural/social values, competing nation-state interests, and historical inter-state conflict can create barriers to a system of standardized access and administration to human rights regarding housing, political determinism, and sexual liberation, to name a few. Ivy also investigated the extent to which states may individually actualize human rights and their limitations. For example, Ivy investigated the extent to which democratization in post-colonial African countries might provide better access to Human rights related to social welfare programs. Ultimately, as a first generation Canadian and a proud ‘third culture kid’, Ivy’s passion for human rights and international development grew from her childhood exposure to both the privilege and poverty of those in her community.